Here are the techniques for installing the recording equipment in the nest:

Welcome behind the scenes of the ‘Falcons of Théding’, on this page you will find out how is installed the equipment to film the falcons in the nest, and what software is used to allow the broadcast of the video on the Internet.

The nest 2018-2019 has been adapted to incorporate the webcams and thus have a better view of the nest. As shown in the map below, a motorized webcam (DLink DCS-5222LB) is placed inside the nest. A second motorized webcam (Hikvision DS-2DE2A404IW-DE3 4MP) placed on the outside of the nest by means of a perch, allows to view the edge/perch. The two webcams are equipped with an infra-red vision, so the falcons are visible 24 hours a day.

A system has been thought so that we can easily increases the surface of the nest. Thus the nestlings can have more room to develop and to train their wings. 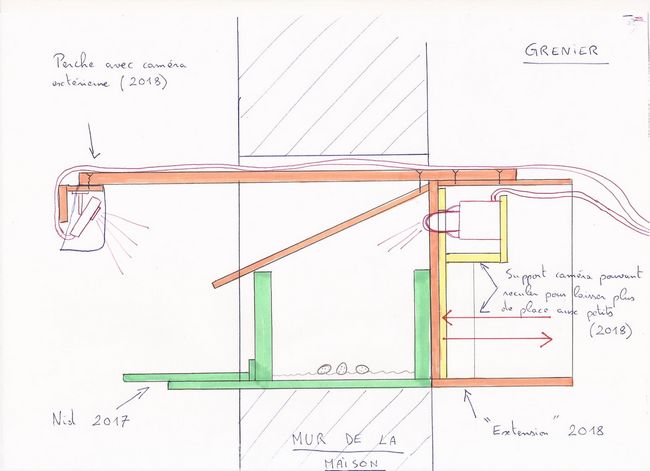 Since 2017, the presence of a computer is no longer necessary to make the video relay. In fact, the webcams used are I.P. cameras (or ‘network cameras’) using the Internet Protocol; So they are directly connected to the internet modem via a 20-metre ethernet cable. With the same length, an extension cord is used to bring the power supply.

The internet modem, which is also switched on 24 hours a day, is set up to redirect (TCP) the broadcast server (external to the network) to the local cameras (inside the network).

A new server (Cloud LSDD 50GB), provided by Scaleway (15 €/month), retrieves the video stream from each webcam and encode it to the right format for YouTube. From the website, or from the YouTube platform, on computer, tablet or mobile, the nest is widely accessible worldwide, 24/7! A replay is possible up to 4 hours back.

Some pictures of the installation around the nest:

The equipment is protected by lightning conductors.

The domain and the domain name are hosted by OVH (30 €/year). The site web is managed thanks to WordPress (free). The videos are hosted on YouTube.    > The webcam blue tits implements:

Since 2019, it is possible to follow a tit nest live. The principle of diffusion is exactly the same as for hawks.

For installation, a compact DLink camera model (DCS-4622) is integrated into a false ceiling of the birdhouse. The camera is connected to the internet thanks to an ethernetcable. The latter can also power the camera electrically with POE technology.

In this same false ceiling (perforated by small holes), a small LED projector is integrated. It is connected to a socket that turns on and off the light at sunrise and sunset.

The nest box is located 30 meters from the house, connected with long cables (electric and ethernet) 40 meters in length, which passes in an underground sheath.

> The implements for redstart:

Since 2019, it is possible to follow a nest of redstart live. The principle of diffusion is exactly the same as for hawks.

For installation, the camera (Edimax IC110W) is attached to the front of the nest. The nest on a beam placed under a roof, against the wall of the house. It is connected to an electrical outlet thanks to an extension. The internet connection is via wifi. Features of the redstart webcam:

The new nest installed in the winter 2016-2017 visible in the photo below (in open position) was designed with 2 openings, identified in red (top and back) to place the webcam. 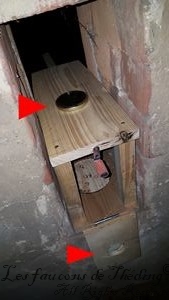 The broadcast server that was used this year was IPcamLive, this one connected to the Internet modem in order to recover the video of the webcam and to broadcast this pictures more widely: this meant that it allowed to broadcast the live webcam to an unlimited number of people simultaneously.

This paid service (30 €/mois/webcam) also allowed to archive 1 picture of the nest every 2 minutes.

Until the end of 2017, the site was administered with the Macromedia Dreamweaver 8 (Adobe) program. 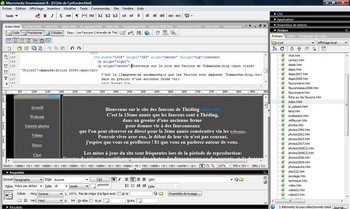 At that time, two USB cameras were used to film the Falcons. They were camouflaged by a black bag or a piece of cardboard, the LEDs had to be witched off. Via USB extensions, the two webcams were connected to the computer placed in the attic. The program ‘VisionGS Business Edition-v 1.50 Final‘ was used to relay pictures from webcams to the OVH server which itself allowed to display the nest live on the website.