The reproduction of the kestrel

The kestrel couple begins to be heard at the nesting site by the end of January. They will perform acrobatic flights, couplings and the male will bring offerings to the female in the location he will have chosen for the future nest. There will be only one litter per year.

The Kestrel Falcon occupies old corvids nests, holes in the trees, cavities in the cliffs and more and more often it approaches the man by settling in wall cavities, nests built by man or even in flower pots on balconies.
No material will be provided: the eggs will be laid on the surface of the nest, so often on rocks or stones.

How to attract a couple of hawks

You can also attract kestrel to your home by building a wooden nest. You must choose a heigh location with a clear view so that parents can monitor their offspring from a distance. Place the nest before the month of January, as it is during this month that the kestrel are looking for a nest.

Mating begins 1 to 2 months (sometimes longer) before laying ; this several times a day, close to the nesting site.
The mating will continue several days after the end of the laying, with the objective of securing a replacement clutch if it would happen to the first (destruction by a predator, for example). 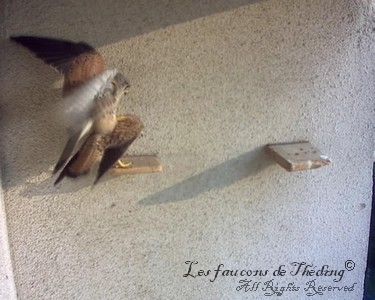 The start date of laying varies from 1 to 3 weeks from one year to the next, from one region to another, from one couple to another. Generally mid-April, 3 to 6 eggs (very seldom 7) are laid with an interval of 2 to 3 days. The number of eggs will be proportional to the amount of food that the couple finds in its hunting territory.
The sitting on will begin before the laying is completed. On a clutch of 6 eggs, the female will begin to lay 4 to 5 eggs. In this way, there will often be a difference in age between the last chicks that are born later than the first. This difference can be fatal for the weakest if the intake of food is not sufficient.

The eggs have a beautiful spotted brick red color. In most cases, the last egg laid will be lighter coloured than the others. 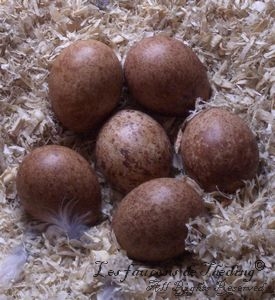 Last egg (center) lighter in colour than previous ones

The female will ensure the sitting, replaced by the male after it has brought the meal. The relay performed by the male can last from 5 minutes to 1 hour. The female does not hunt during this period. The incubation time is about 28 days.

Once the nestlings are born, the female feeds the young, warms them up if necessary and stays nearby to keep the predators away. Depending on the age and experience of the male, it will participate or not in the feeding by beak of the nestlings.
The small ones are born with a layer of down that they will retain until the appearance of the plumage. They open their eyes after a few hours and are able to stand on their paws after 1 week. 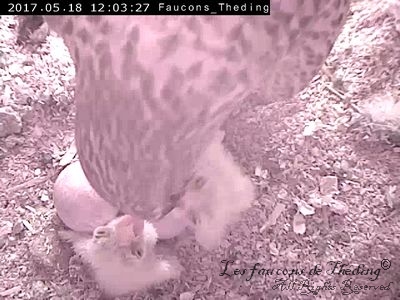 By the age of 2 weeks, the nestlings will need more food, so the female will resume hunting.
The kestrel parents will, as they go, let the little ones feed themselves by leaving the nest with lumps or whole prey.
The two Kestrel Falcon parents have a crucial role and importance throughout the breeding season. The death of one of the two members of the couple would result in the loss of the offsprings.

The takeoff of the nest of young falcons

The young Falcon Kestrel will fly away after having spent about 30 days in the nest, incited to go out by the parents waiting outside with the meal.
Once they have had their first takeoff, the young ones will stay with the parents for at least one month, and until autumn for some. They will learn to hunt and once emancipated they shall disperse. It is said that only 40% of them will survive the second winter.
The males will have their definitive plumage between 2 and 3 years. And it is at this age, for the most part, that they will form their couple and it will be their turn to reproduce.
The couple is united for life. Depending on the region, parents can stay at their nesting site all year-round. Otherwise they migrate to a more conducive environment for hunting.

Find videos of Flight of nestlings in the photo galleries.