Kestrel: Learn all about this Raptor

The Kestrel is a small raptor that measures between 32 and 35 cm, similar to the size of a city pigeon. The male weighs about 200g and is smaller than the female, which weighs about 240g. It has long wings and elongated tail. Its flying wingspan is a little larger than that of the pigeon and its pointed wings give it a more slender silhouette. One peculiar characteristic of this bird: its spectacular flight on the spot (called Flight of the Holy Spirit) which it adopts to hunt.

The cry of the Kestrel

The kestrel bears its name because of its characteristic cry <ki ki ki>. It is heard more in the spring by emitting alarms or warning sounds. This is the way the male warns of his arrival at the nest.

Sound of the Falcon Kestrel:

Recognize the kestrel among the other Falcons

The Kestrel Falcon is the most common of hawks, like all species of raptors, it is protected in France, according to the Law of 10 July 1976 (Implementing decree of 17 April 1981) on the protection of nature. Unfortunately, its population continues to decline as it is a victim of pesticides, bird traffic and hunting. It has happened that peasants slaughter this bird for fear that it hunts their chickens, which is impossible since it must be able to carry its prey to consume it safely in the height of the trees.

To distinguish young falcon, male and female, we can look at the waist, but especially the plumage: 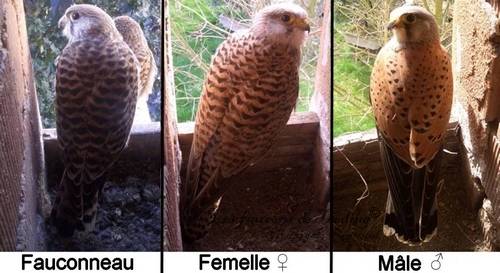 The females are of a brown-barred black while the males have the red back with black dots as well as the blue-grey head and tail.

Distribution and migration of the Kestrel Falcon

The Kestrel is present in France all year round. It is partly sedentary, except in the northeast and in the mountains (1, 000m above sea level), where it deserts nesting sites. Some couples, more sedentary, will gladly spend winter near the nesting sites as long as the climatic conditions are not rigorous. The birds of central and northern Europe are partial diurnal migrants moving south from the end of August to the beginning of November.

Kestrel lives in Europe, Africa and Asia. The populations of Western Europe are rather sedentary.

Note: This page gathers the knowledge I have acquired through my personal observations and my bibliographical research.