Would you like to know more about the kestrel? Discover its diet and its rhythm of life. From March to July the falcon’s nest is busy, it’s time for you to watch the webcam!
To recognize the kestrel among the other races, it is easily recognizable by its cry or plumage.
Its favorite hunting technique, when the weather conditions are met, is hovering. Hovering allows the kestrel to more easily spot its prey.

In rural areas, the kestrel is a valuable asset for agriculture. Indeed, its favourite prey is small mammals such as mice, shrews, and common sparrows. It also consumes lizards and sometimes large insects.
It can be seen attacking larger birds than it self, but this is only for the purpose of protecting its territory and keeping away all danger from its offspring.

Food in the urban environment

In urban areas, the diet of the kestrel was studied by the Corif (ornithological Centre Île-de-France) at the level of Notre-Dame-de-Paris: 2021 feces samples were collected and analyzed by Jean-Pierre Quéré, a researcher of INRA. It emerged that 2/3 of prey consumed by the kestrel were rodents, mainly field shrews. As there are apparently none in Paris, they will certainly look for them in the suburbs and in the woods of Boulogne and Vincennes.
The remaining 1/3 is made up of small birds which are mostly sparrows, whereas rurally small birds only appear for about 5% in the diet of kestrels.

In winter, the male and female spend a quarter of the day hunting. During the breeding season, the male captures food for the whole family. 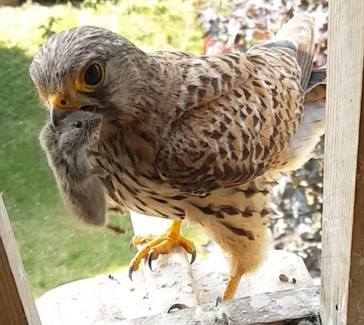 Mouse to feed the nestlings

Note: This page gathers the knowledge I have acquired through my personal observations and my bibliographical research